Visit Budapest… for a beautiful balance of relaxation and recreation. Purchase a bus tour ticket from the many city operators, walk through the picturesque districts of Buda and Pest regularly snapping selfies with iconic figures carved in stone for remembrance’s sake, and end your day at a thermal spa baths where the natural springs’ recorded temperature stands at 76°C(!). Finally, end your day with a cup of goulash – a traditional Hungarian meat and potato stew – and know that you’ve truly experienced at least a small, but significant snapshot of what Budapest has to offer.

I’m not kidding about the historic reference; it’s not only the buildings that emanate antiquity! My friend couldn’t stop remarking about “how oooolddd” everything was – the cars, clothing style and trends, transport system and more. In one store we noticed an advertisement for nighties and pajamas that was probably last featured as ‘novel’ in the 1970s or ’80s in the UK, yet was being promoted as a ‘new’ trend in 21st century Budapest. I’d guess it’s about a decade or so behind the style and trends we are used to in the UK, but honestly…so what? That’s the beauty of it!

Certainly, Europe is renown for it’s old-world feel; that’s what makes it so exciting and popular – the desire to discover something new among, in this case, the ruins of a once-strong Eastern European empire. Did you know that over the past century and a half, Hungary has ceded over 60% of its land? Crazy, right! Did you know that the architectural magnificence decorating the heart of Hungary’s capital is attributed to multiple cultural influences including the Ottoman-Turks, Italians and the indigenous Hungarians themselves? Did you know Budapest is home to the largest Synagogue in the whole of continental Europe? Did you know, did you know, did you know… My mind was blown (not literally, obviously) every single day by the facts I learned that, although seemingly irrelevant to a simple 4-day European jaunt, were integral to an incredibly unforgettable experience. It seemed to us that in many cases Budapest was slightly trapped in the past. Yet the past made sense of their present, and it was only in comprehending the plight of the people over the past century, or even the past two generations, that I understood why everything looked so old, and why a particular statue, building or hill was erected in a particular place.

In the end, we left no longer questioning why everything was and looked sooo ooollddd but also hoping that what was sooooo ollldd would be maintained in this state for as long as possible. Change, in this case, would be a rupture from an incredible, at times haunting, past – parts of which must forever be remembered and experienced. 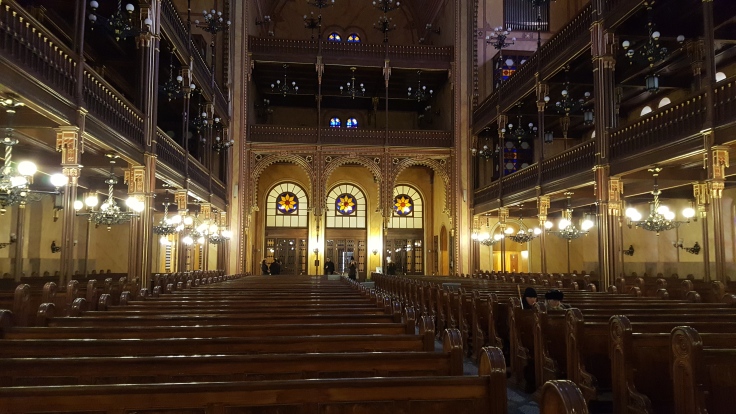 For more information about the Jewish synagogue that made an everlasting impression on me, search Dohány Street Synagogue. It is the largest synagogue in Europe and the second largest in the world behind the Synagogue in New York, USA. Visit, take a guided tour. You’ll leave changed.

Budapest’s natural springs record temperatures of 76°C. Discovery and manipulation of these underground thermal waters led to the creation of the most surreal experience: hot thermal baths surrounded by snow and ice.

Dressed in just a one-piece swimsuit, wrapped in a thick white towel to protect us from the -4°C chill of wintertime Budapest, and flip flops on our feet, Sandy and I, unsurprisingly, were hesitant to step outside. Pneumonia is probably the first word that sprang to mind during the 50-metre trek from the changing rooms inside to the brown wooden bench outside where we unwillingly released our towels before cautiously approaching the thermal pool. Flu was the second thought. Perhaps, frost-bite the third. You see, even though a visit to these natural thermal springs was the main reason for this trip, fear of cold and its consequences crept in and my mind couldn’t quite comprehend how this was going to be an enjoyable experience. The pool was filled with people too – kissing couples, friends floating by. Yet in this case, seeing was not enough to believe; I needed to experience it…

I keep mentioning the ‘old’ feel of Budapest. The thermal baths’ experience was no exception. In my mind, having ridden on the ‘Hop on, Hop Off’ Budapest bus tour and learned about the history of the baths, I was transported back to times when these baths were first chiseled and imagined this scene one hundred years ago. Not much had changed. Except perhaps now there were a few foreigners (me included) immersing themselves in this natural wonder. Surreal, right?

Not a fan of the cold? Visit Marbella...

Too far to travel? Visit Chester…